Ishbel McWhirter is a local and international artist who was born in London, took her first steps in Glasgow and then was brought up in North Wales. Her father was Scottish and her Welsh mother’s forebears include the bard Hedd Wyn.

She studied with the Austrian artist Oskar Kokoschka for several years and has had over 30 solo exhibitions. Her waterside studio has inspiring views across the Menai Strait and into Snowdonia.

Her insightful mother sent her to A.S. Neill’s progressive boarding school, Summerhill, which evacuated from Suffolk to Ffestiniog during the war. The dramatic landscape surrounding her made a very deep impression on the teenager.

At a Summerhill exhibition, held at the Arcade Gallery in London, Ishbel was ‘discovered’ and hailed by the BBC as a rising star. The following year at the age of eighteen she held her first one-person exhibition in London’s Bond Street. Later, her work came to the attention of the great Viennese artist Oskar Kokoschka, who invited her to become his pupil in London.

An excerpt from the V&A museum catalogue describing her portrait of A.S. Neill succinctly summarises the two formative influences on her life (A.S. Neill and Oskar Kokoschka): “The A.S. Neill in this context represents an act of double homage by the pupil, to two of the most lively and liberating influences at work in their different ways in post-war British society”.

In a profile of Ishbel, Bryan Robertson, the art critic, describes her as “… A draughtsman, a poet, a recorder of familiar scenes and a social commentator. But she is an artist first and foremost, although her humanism is an integral part of her artist’s world. As an artist, she has magnificent technical ability and the power to create the act of revelation which illuminates any aspect of life that she may have recorded: to simplify, to transcend and fix upon the page, uniquely and startlingly, a statement which uses a highly sophisticated pictorial language based upon form, line and structure.”

In 1945 Oskar Kokoschka had written in her very first catalogue “I see my pupil Ishbel moved by curiosity….she pictures her heroines with a serene remoteness, lovely restraint, and the strangeness of the designers of the white funeral vases of ancient Greece.” Speaking later about her portraits, Oskar Kokoschka said admiringly “The colour looks as though it has bled out of the persons skin rather than being laid on with a brush”.

In 1990 as a tribute to her talent and debt to Kokoschka’s encouragement, a loan retrospective was held at the Kokoschka archive museum outside Vienna.

She often paints in her Anglesey studio overlooking the Menai Strait and Snowdonia, a panorama that has fascinated and inspired her recent work. She also has a studio in Hampstead, London. 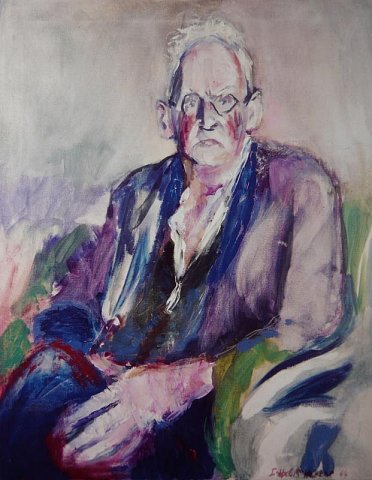